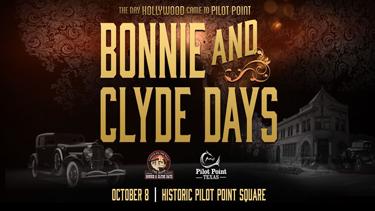 Back in 2022 is the ever-popular Bonnie & Clyde Days Festival, which will be held October 8 on the Historic Pilot Point Square!

During the all-day festival, Pilot Point becomes a piece of living history with 1930’s-era family fun! Festivalgoers step back in time with a Classic Car Show, a fleet of Model As, and historic exhibits and demonstrations. Attendees enjoy family fun, craft and food vendors, live musical entertainment throughout the day, and a FREE Kids Zone featuring children’s activities, a petting zoo and a face painter.

The annual festival is held to commemorate the day Hollywood came to Pilot Point, when the Warner Bros film “Bonnie and Clyde” shot its famous bank robbery scene at the historic Farmers & Merchants Bank Building. Filming occurred in 1967 for the classic film, which starred Faye Dunaway and Warren Beatty. In addition to the movie filming, Pilot Point was a known hangout of the REAL Bonnie and Clyde and the Barrow Gang. Local legend has it that a family member lived in the area and offered the gang a safe haven.