Music on Main featuring The Derailers 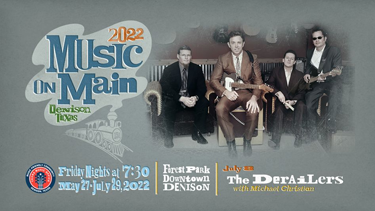 The Derailers were founded in 1993 in Austin Texas by Brian Hofeldt and Tony Villanueva. Over those 25+ years, the band has released eight studio albums, two live records, one retrospective collection and has been a part of numerous compilations and other recording projects.

The Derailers have been featured on the stages of The Grand Ole Opry, A Prairie Home Companion, Late Night with Conan O’Brien and the US President’s Inaugural Ball. The band performed at their friend Buck Owens’ 70th birthday party at Owens’ personal request. A Derailers song was played back to Earth from the first iPod taken into outer space by astronaut Dr. Stephen K. Robinson. They also appear as characters in two Stephen King stories.

The Derailers have toured many times across the United States, Europe, and Japan, but they are always happy to return home to Austin and their “natural habitat” the Broken Spoke.
Of their 25 years as one of the hardest working bands in country music, founder Brian Hofeldt says “We’re just warming up!”

Michael Christian will open the concert.

Music on Main – Fridays May 29th through July 29th 2022
Music on Main is a free summertime concert series held each year in downtown Denison. Attendees should bring their blankets or lawn chairs to enjoy the evening. The evening begins with a Facebook Live broadcast of Music Alley Happy Hour at 6:30 p.m. on Denison Live. Dine in, carry out, or order deliver from your favorite downtown eatery on your way to the concert. There will also be vendors on site. The concert begins at 7:30 p.m. This year the event is moved to Forest Park at 300 W. Crawford where there will be plenty of room for social distancing with 6 times the space.