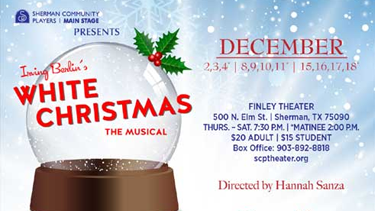 We may or may not get snow here in Texoma this holiday season, but it will be a White Christmas at the Finley Theater as Sherman Community Players stages the beloved musical full of songs by the iconic American composer Irving Berlin.

The show, based on the classic movie from 1954, tells the story of two World War II veterans turned song-and-dance men who end up romancing two beautiful singing sisters at a lodge in Vermont, with plenty of seasonal fun along the way.

Guest director for the production is Texoma native Hannah Sanza, 22, who recently graduated from Abilene Christian University with her BFA in Theater. Hannah has been acting with SCP since she was five years old and has also assistant directed and co-directed for the theater over the years, and she is thrilled to return to the Finley at the helm of this December’s show.

Tickets are on sale now for White Christmas, and the production will run from Dec. 2 through Dec. 18 at the Finley Theater in Sherman. For ticket information and show times, go online to scptheater.org or call the box office at 903-892-8818.