It’s that time of year again, where Sherman Community Players dazzles the audiences of Texoma with good ole’ Branson style entertainment. This year’s benefit performance promises to serve up just the right amount of pep and cheer to take patrons minds off all the negative stories in the news, and to replace the negativity with “A Grand Night for Singing”. A musical revue of all the hits which the musical team of Richard Rodgers and Oscar Hammerstein penned over their long musical careers; the evening will be filled with such favorite songs from shows like Oklahoma, the Sound of Music, and Allegra. Cast to bring these wonderful show tunes to life are featured performers, Amanda Pillow, David Lewis, Pamela Sanza, Jennifer Becherer, Les McConnell, Caroline Kellam, and Rafe McConnell, all who have performed in various shows for SCP and Theatricks during the past season. “With the benefit we don’t hold auditions” explains Sherman Community Players Artistic Director Anthony Nelson, “I hand-pick the talent after observing how people work over the course of the year or season, and if someone stands out to me, not just from the talent they have exemplified on stage, but their general attitude about being involved with Sherman Community Players, I ask them to be involved. In a way, it’s a way of thanking them for all the work they put in, both on stage and behind the scenes.”

This year’s performance opens August 5th and runs through the 14th on the weekends. Tickets can reserved by calling 903-893-7652. The evening is not only filled with the glorious music of R&H but a three-course meal is served during the act breaks, catered by “Feast on This!”.   The price of admission is $45 per seat and sponsor tables are still available for $600.00. “It’s a great way to support live theatre in Texoma, as we round up our 67th season; it helps raise money for Sherman Community Players and helps up with the end of the term budget, so of course I encourage everyone to attend.” concludes Nelson. 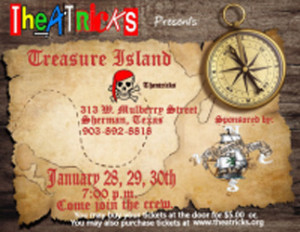 Theatricks’ teen theatre group, the Supporting Cast, has prepared their production of TREASURE ISLAND which is opening Thursday, January 28 at 7 p.m. in the Honey McGee Playhouse and also plays January 29 and 30 at 7 p.m.

Robert Louis Stevenson’s.”coming of age” adventure about pirates and treasure hunting was originally serialized in the children’s magazine Young Folks between 1881 and 1882. It was first published as a book in 1883. It is one of the most frequently dramatized of all novels and has created in the imaginative minds of many young readers just what the characters and life of an adventurous pirate might be like. This play version of TREASURE ISLAND was adapted by former Supporting Cast member Austin Tooley in 2005.

“This production and the Supporting Cast program has been an adventurous process in itself that began in 1993 when the Theatricks Advisory Council first created the Supporting Cast as an outlet for teens 6th through 12th grade to learn and apply their knowledge of the theatre arts,” states Theatricks Director Webster Crocker. Twenty of the current Supporting Cast members have taken advantage of this theatre opportunity over the past few months and have cast, directed, designed and constructed set, lights, sound, costumes, makeup, and advertising to produce TREASURE ISLAND this weekend.

“I am truly thankful to the Sherman Community Players Board of Directors for so graciously approving the Supporting Cast’s production of TREASURE ISLAND, it is truly the culmination of everything that the Theatricks program has been trying to achieve for the children in our community since I first became a part of SCP in 1989,” says Webster Crocker.

The Supporting Cast’s TREASURE ISLAND is not just a production, but more of an event. There will be prizes awarded to those audience members who dress up as a pirate, as well as a treasure hunt game and Pirate Kits are on hand for those who really want the full theatre experience.

TREASURE ISLAND is sponsored by the Compass Rose, a replica of an 1800’s wooden brigantine ship that is docked on Lake Texoma. Tickets to see TREASURE ISLAND at the Honey McGee Playhouse are $5.00 and can be purchased and reserved online at www.theatricks.org or at the door the night of the show. Seating is limited, so don’t wait too long to come join the Supporting Cast crew this Thursday 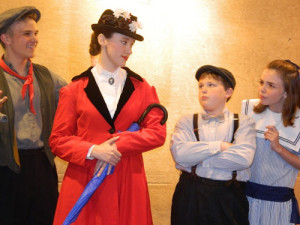 Theatricks launches the 2015-2016 season with the award-winning Broadway version of Mary Poppins.  Everyone’s favorite nanny descends onto the Honey McGee stage beginning September 10 and runs through September 20, 2015 in Sherman, TX.

The Theatricks presentation of one of the most popular Disney movies of all time Mary Poppins captures hearts in a whole new way. Based on the books by P.L. Travers and the classic Walt Disney film, Disney and Cameron Mackintosh’s Mary Poppins delighted Broadway audiences for more than 2,500 performances and received nominations for nine Olivier and seven TONY Awards, including Best Musical.  The supercalafragalisticexpialadocious adventure is a toe-tapping show with familiar and new music, dazzling dance numbers and Poppins-worthy stage magic.

This once in a life-time production has a cast of 28 and is accompanied by an orchestra of 13 with support from a volunteer staff of over 25 community members.
The story unfolds in 1910 England as the jack-of-all-trades, Bert, played by Rafe McConnell, narrates a tale of the troubled Banks family.  Mr. and Mrs. Banks are played by Paul Jordan and Jennifer Becherer alongside Erica Romm as Jane Banks and Luke Rostyne as Michael Banks. Jane and Michael are naughty children who give the household staff and townspeople plenty of trouble. Kaitlyn Casmedes, Christina Childress, and Leigh Walker play household staff and the colorful town characters are played by Brandon Carnes, Lew Cohn, Drew Crocker, Ken Kozak, Bella Ortley-Guthrie, and Amy Shojai.
Tickets are available for season members beginning Monday, September 7 and for all others beginning Tuesday, September 8. Tickets are also available online at www.theatricks.org. Ticket prices are $12 for adults and $10 for students. 2015-2016 Season Memberships are available at the ticket office for $25 adult, $20 senior, and $18 student and include Mary Poppins, James and the Giant Peach, and The Boxcar Children.

Production dates for Mary Poppins are September 10,11,12,17,18,19 at 7 p.m. and September 12,13,19,20 at 2 p.m.  Tickets are $12 adults and $10 students
Theatricks 2015-2016 season is sponsored by Pediatric Dental Specialists and Stokes Orthodontics, and MARY POPPINS is sponsored by Texoma Medical Center with ZFX flying special effects sponsored by Markl and Sons Heating and Cooling.