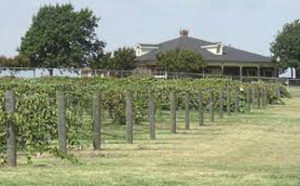 Grayson County College’s Viticulture & Enology program is one of the few degreed grape growing and wine making programs in the country, and the first of its kind in a Texas community college.
The T.V. Munson Viticulture Encology Center contains a large classroom, an extensive wine laboratory, and an instructional winery. Just down the hill from the T.V. Munson Center is the T.V. Munson Memorial Vineyard which is planted to 3 acres of various grape varieties including over 60 of the original varieties bred by T.V. Munson, and other hybrid and vinifera grapes. Both the vineyard and the winery serve as an excellent learning tool for students in the Viticulture and Enology Program.

Thomas Volney Munson, biticulturalist was born in Illinois in 1843 and moved to Grayson County in 1876.  He traveled extensively throughout Texas and other states publishing his observations.  Much of this work centered around improving the different varieties of American grapes, intorducing more than 300 grape varieties.  T.V. Munson is affectionately known as “The Grape Man of Texas”.

During the 1840’s European vineyards were devastated by a fungus parasite, losing nearly 80 percent of its vines.  The European wine industry imported native rootstock from the United States, but these cuttings brouught in a plant louse which attacked the slowy recovering vineyards.

The French wine industry requested he send some of the grape hybrid rootstock that he had developed during his studies in Denison.  This rootstock was grafted with varieties of European vinifera.  Because of Munson’s role, the French govennment in 1888 sent a delegation to Denison to confer on him the French Legion of Honor Chevalier du Merite Agricole.

These same rootstocks are still being used today, so there is a little Texas in every French wine.   Currently, over 60 of the original varieties are grown in the T.V. Munson Memorial Vineyard, in addition to other hybrid and vinifera grape varieties.

Most recently Grayson College has partnered with the cities of the Texoma region, local industries, supporting institutions of higher education, and Cognac, France, to form the Craft Beverage Alliance.  An active and vital Cooperative will unite the existing regional wine, beer, and distilled spirits businesses, and pave the way for new businesses to open in the Lake Texoma area.