The Preston Trail National Society Daughters of the American Revolution of Pottsboro, Texas had a busy two weeks at Denison’s Frontier Village and Museum.

On April 10th, many of the chapter Daughters, along with the cooperation of Museum President Dr. Charla Harris and other staff from the Frontier Village, especially Village grounds Manager Mark Harris, completed the inside re-chinking to one room of the Price/Shaw Cabin.  Some members of the Preston Trail DAR who volunteered in this all-day effort were: Regent Jeanne Groff, Sandy Sharp, Natalie Bauman, Lynda Fleming, and prospective members Roma Waidner and Angela Rodriguez.  The Preston Trail chapter as part of its Historical Preservation mandate adopted this cabin to act as year-round caretakers and docents during special events.  The NSDAR awarded a grant to the Frontier Village to restore the cabin, and April 10th activities were part of that ongoing effort.  The cabin is a dog-trot style house, so one more interior room remains to be re-chinked.  It is hoped the work can be completed before the Frontier Village’s 50th Anniversary celebration in June.  Other members that day met to plan the upcoming Memorial, help chink and give the finishing touches to the completed room of the cabin by cleaning up and arranging the furniture.  They also cleaned the nearby church building across from the Price/Shaw cabin.  These members included: Jeanne Groff, Natalie Bauman Gloria Huhtala, Lisa Lettie, Vicki McComack, Katie Strief, Sandy Sharp, Lynda Fleming, Johnnie Templeton, Margaret Alverson, and Michelle Alverson.

April 17th there was another special day.  It started with a brunch to welcome the Texas State Regent, Mrs. Susan G. Tillman and Texas State Registrar, Mrs. Susan Johnston at the Bay at the Lake, aka “Bon Appetite Y’all” at 10:00 am. The chapter Daughters enjoyed visiting on a more personal level at he relaxed event.

In the afternoon, at Frontier Village, the DAR chapter and guests assembled for two services in the Village Museum. The first service was to dedicate a flagpole, flag, and bench, donated to the Frontier Village, and placed in front of the Price/Shaw cabin.  These items were donated in memory of departed Daughters and husbands of Daughters of the chapter.  After these proceedings, the Memorial Service began in honor of our departed members, complete with religious hymns, prayers, patriot rituals and further tributes to those departed.

One of the chapter’s foremost areas of service is to America’s veterans.  The entire Preston Trail chapter participates in fundraisers that fund a program called “Opening Doors for Disabled Veterans,” which remodels the bathrooms of disabled veterans of Grayson County so they will become handicap accessible.

Would you like to be involved in the good works that DAR participates in?  Anyone interested in receiving help to prove their ancestry for qualification to become a Daughter of the American Revolution are welcome to contact our chapter at www.facebook.com/PrestonTrailNSDARPottsboroTX75076 on Facebook or www.DAR.org.

The Preston Trail Chapter of the DAR next meets the first Thursday of the month at 5pm for snacks and fellowship and at 6pm for chapter meetings and programs from September to May. There is no meeting in December.  The meeting location is at the Georgetown Baptist Church north of Pottsboro at 207 Georgetown Road.

The National Society Daughters of the American Revolution was founded in 1890 to promote historic preservation, education and patriotism. Its members are descended from the patriots who won American independence during the Revolutionary War. With more than 177,000 members in approximately 3,000 chapters worldwide, DAR is one of the world’s largest and most active service organizations.  DAR members are committed to volunteer service having served more than 12.5 million hours in communities throughout the world during the past three years.  To learn more about the work of today’s DAR, visit www.DAR.org or connect with DAR on social media at facebook.com/TodaysDAR, twitter.com/TodaysDAR and youtube.com/TodaysDAR. 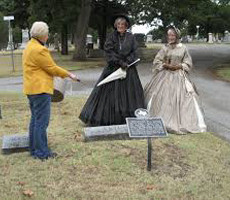 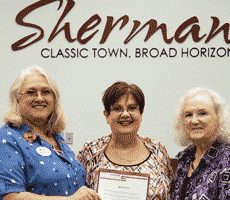 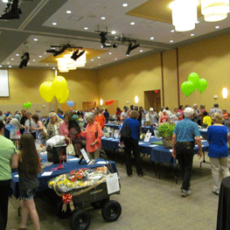